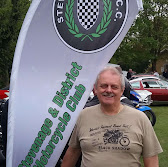 I’ve been the Club Chairman since 1979 and I have been involved in motorcycles nearly all my life.
It was hard not to take an interest in bikes as my father was the late George Brown (a founder member of the club) of Vincents Nero and Super Nero fame, and once had a motorcycle shop in Stevenage.

At 16 years old, I started sprinting (drag racing in todays terms) on a 250cc Ariel Arrow, winning the 250 British Sprint Championship 3 times. I then upgraded to Nero and then Super Nero.

I also road raced a 350cc Aermacchi and then a Yamaha TZ350. Unfortunately my road racing career came to an abrupt end when I crashed the Yamaha in the Isle of Man at Brandywell putting myself in hospital for six months. (least I got a ride in the helicopter so they tell me).

After that I went back to sprinting on Super Nero and achieved six World Records.

My first road bike was a Triumph Tiger Cub but today, now getting on a bit in life, I ride sedately on a Triumph Street Triple. 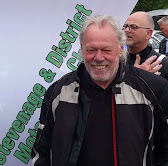 I first joined the club in the mid sixties, served on the committee in the early seventies and I've been Club Secretary since the early eighties.

My first bike was a Excelsior Talisman twin, followed by a NSU Max and then an Ariel Arrow. I've had various road bikes since.

I started road racing in the mid sixties on a 125cc Bultacos followed by a 125cc Yamaha, competing
in club events and the 125cc British Championship.

At that time, I also took up competing in trials events on Bultacos, Montesas and a Suzuki. I stopped
road racing in the seventies but continued trials riding into the early eighties.

I've been a regular visitor to the Isle of Man since 1976 and still love going there for the TT.

I still ride and am now on my 4th Aprillia - they are fantastic bikes and ooze class and style. I really can't understand why every club member hasn't got one. 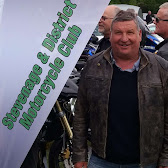 ​Sadly our Treasurer has died in a motorcycle collision.
You can read about him by clicking here.

Former Treasurer, Bob Voss, has very kindly taken over the role on a temporary basis until our next AGM.

Others Making Up The Committee 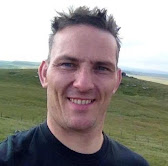 ​I'm 47 years old, ride a Triumph Street Triple and have been an active member of the Club for about 17 years.

I have for the past 6 years been on the committee - my role being to organise ride outs and to be involved in the organisation of bike trips with other members.

I'm a keen classic bike enthusiast and have visited the Isle of Man on several occasions, twice doing the parade lap at the classic TT. 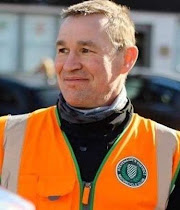 I joined the S&DMCC in 1988 when I first moved to the area as a way of getting to know local motorcyclists and I've been with it ever since, often being on the committee.

I've been riding all year round every year since I was 16, having started on an embarrassing Honda C50 (but it was faster than all my mates 50s!), moving swiftly to a Yamaha RXS100 and owning more than 30 bikes of various types over the years. At the moment, I have a Suzuki DL650 V-Strom which I use most days, a Triumph Tiger 1200 Explorer which only comes out when there is no salt on the road and a Honda CRF250L.

I've also done a fair bit of green-laning and motocross over the years with bikes ranging from an old Suzuki TS185ER to ex-army Armstrong MT500 and currently the Honda CRF250L but my favourite was a Yamaha WR450F.

I try to get at least two long distance tours in each year (normally more) and I go along most Monday club nights - usually leading the group ride. I'm always up for a ride if I'm not at work and time/commitments allow. I'll also talk to almost anyone so if you come along to a club night, introduce yourself.

I'm also the "webmaster" so if you have any constructive criticism, email me by clicking here! 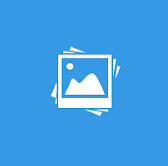 Steve joined the committee in February 2022 so we don't have his "bio" yet. 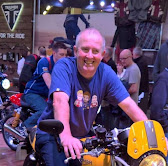 I joined the committee in 2020 after being a member for three years.

After a break of a few years I went onto a Yamaha TRX850, a Ducati Multistrada, Suzuki GSR750, Triumph Tiger 800 and onto my present Triumph Speed Twin 1200.

I have been involved in Supermoto racing as a mechanic and travelled all over Europe and thoroughly enjoyed the experience. 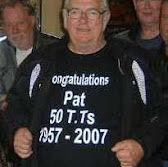 I started riding and passed test in 1952 and I’ve never stopped riding bikes since then. I’ve done approximately 480,000 miles on bike ranging from Ariel, Norton, Velocette and Triumph to Honda and Yamaha in later years. Many of these were sidecar outfits including today’s Yamaha XJ900.

In 1959 myself and my passenger, Phil Chambers, began competing in Sprints (Drag Racing) and hill climbs with a Vincent sidecar outfit supplied and sponsored by world record holder George Brown and prepared and tuned by his brother, Cliff. We were very successful and in the first year became national sidecar sprint champions.

During our racing career we had over 40 wins and course records all over the country. The very famous Brighton speed trials was the event I will never forget - standing start kilometre elapsed time of 24 seconds with an average speed of 85mph and terminal speed of 158mph. This was very fast for a sidecar and passenger in 1961. And but for the fact it was only one way, would have broken the world record.

I still ride all year round and attend the Monday club nights on my outfit.